2022 lies behind us, the perfect opportunity to look back and to see how many Black Series sets we had in 2022 and under what categories they fell. How many new figures did we get? How many kitbashes were among them? How many exclusives are there? I also look back all the way back to 2013 to show you how the line has changed throughout the years! So click through for all the details about the Black Series in 2022!

One of the best Black Series figures in 2022

Before I proceed a few caveats. Because of the very chaotic release schedule it’s not an exact science to determine what was actually released in 2022, and by “released” I mean readily available everywhere, not put on a shelf at 5 Walmarts in Montana or something being available in the UK. For example, the Black Series wave with Aayla Secura has been delivered to at least some collectors in the UK, whereas most people elsewhere still have to wait and will get the wave early in 2023.

I used the database of starwarscollector.de (German language website) to determine if something is a 2022 release or not, and yes, a few figures that are listed for a 2023 release there were available for some people somewhere in 2022. So please keep that in mind!

With that out of the way let’s look at the numbers!

This number has barely changed compared to 2021, when we had 78 sets, if I included the sets that were available at least to some people the number would be virtually identical.

Here a “figure” is anything from a Porg to tiny Babu Frik, Omega’s pet is also included as a figure here. 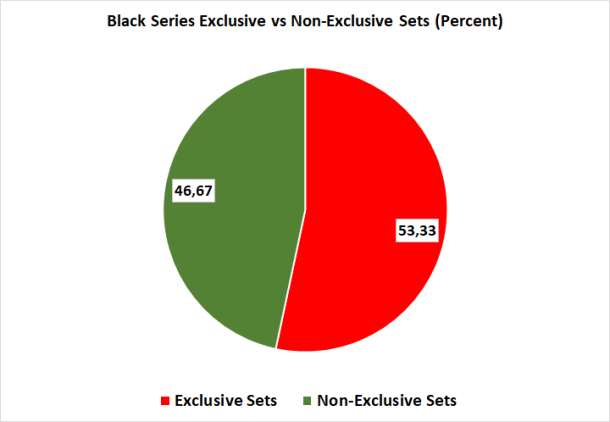 As you can see there is about an even share of exclusive vs non-exclusive sets in 2022, there is almost no change here compared to 2021.

Things look a bit different though when we look at the number of exclusive vs. non-exclusive figures: 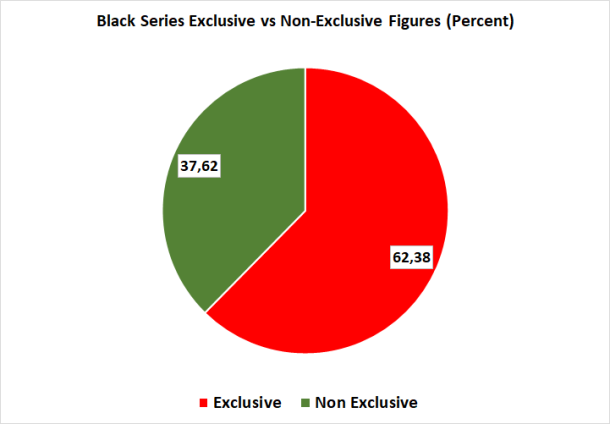 Here we can see that more than 60% of the figures were exclusive. This is easily explained by things like the various Galaxy’s Edge exclusive sets which each had up to 6 figures per set. And again, very little has changed here compared to 2021.

Let’s take a look at the development over time, going back all the way to 2013 when the line first launched: 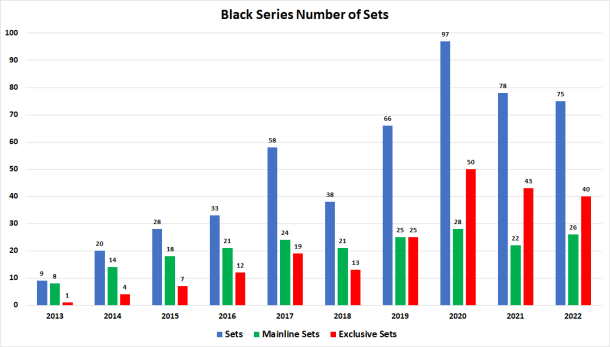 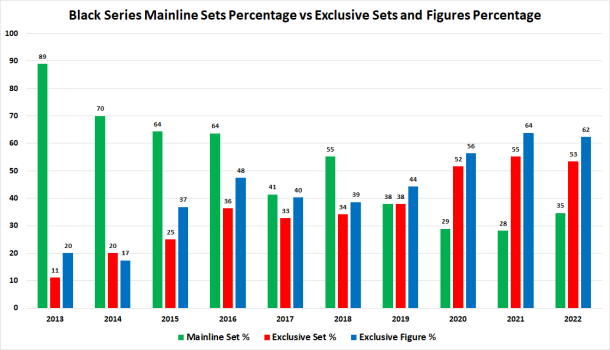 And a look at the percentages over time. The share of exclusive sets and figures has increased since 2020 and remains stable-ish, a litte more than 50% of all Black Series sets have been exclusives since 2020. And while exclusives are the bane of collectors it’s generally speaking always a good sign if a retailer wants an exclusive, it means something is in demand. The slightly increased share of mainline sets can be attributed to the deluxe sets. Without the deluxe sets the percentage would be 25%, in line with what we had in previous years.

How many Black Series sets were released in each of the sublines in 2022? 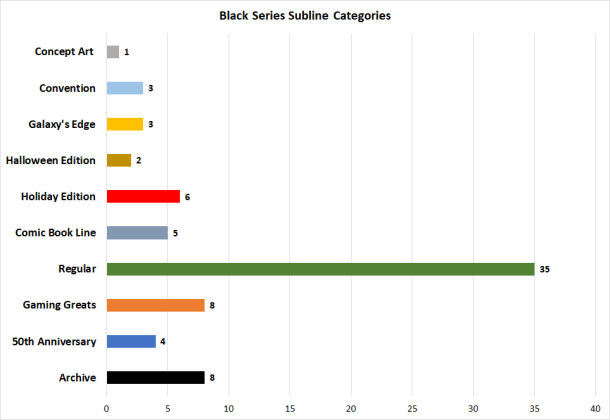 Here you can see that regular figures dominate the releases. “Regular” here does include exclusive and deluxe figures though. “Regular” means it’s a new(-ish) figure in the regular box design. There were 7 deluxe sets in 2022. Funny enough of those 7 deluxe sets only 2 featured all new figures, all the other sets included kitbashed figures. Which means for the majority of deluxe sets Hasbro increased the price because of the paint apps. Now to be fair, paint apps are expensive, relatively speaking, each paint application will drive the price up.

There where no carbonized figures in 2022, also absent is the credit collection. The number of sets is also below of what we had in 2020, but then the pandemic hit.

Let’s take a look at individual figures and under what category they fall, as in, how many are actually all new, how many are kitbashed or mere repaints. Please note that a figure can be both a rerelease and repaint, as is the case with any of the photoreal archive figures. Then there are more difficult cases like the Nodal Modes, two figures for them were released, they are technically speaking different characters but the exact same figures, only differentiated by the accessories. Still, this chart should give you a good overall idea of the distribution of figures. 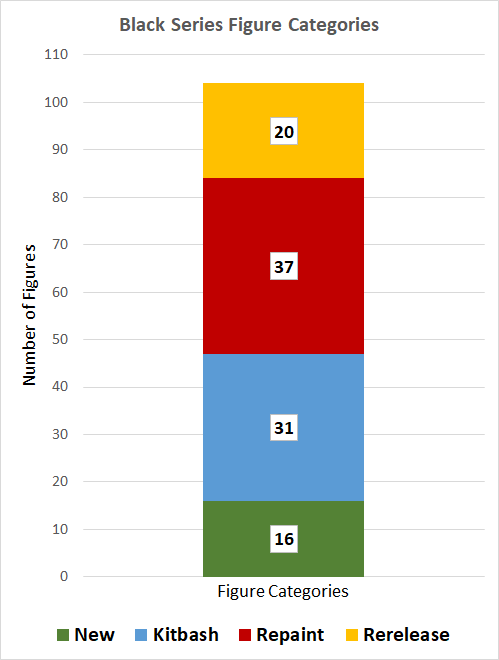 As usual all new figures are in the minority, most figures are repaints and kitbashes. The rereleases are mostly the Archive line, but also figures like Ponda Baba and Dr. Evazan who came in the cantina set in 2021.

When we compare the numbers to 2021, then we see that Hasbro did actually produce 6 more all new figures. This number does include the 2 all new deluxe figures.

Let’s take a look at the development since 2013 and how things have changed over the years! 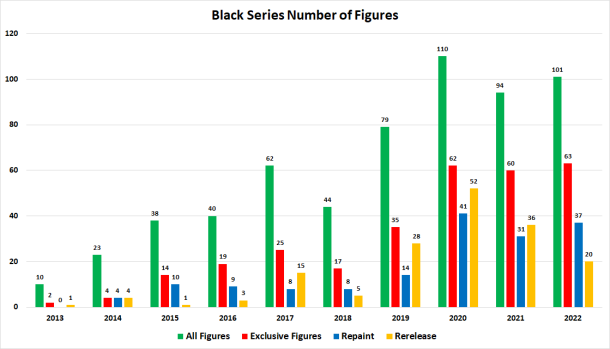 Once again you can see the shift in strategy since 2020, we get a lot more figures in total, but most of those new figures are exclusives and repaints. And with the line approaching it’s 10th anniversary it’s only natural that over the years the rereleases increase, there was nothing to rerelease early on really. You certainly note the decrease in 2018, this was the worst year for Hasbro Star Wars yet, on the heel of The Last Jedi and Solo sales tanked pretty hard. Now it’s impossible to say how much the action figure category was affected, since Star Wars makes a lot of other Star Wars merchandise, but they did report an 80% increase in sales for 2020 for a reason. Sales in the  year 2018 and for most of 2019 were lousy, but then The Mandalorian came along.

Let’s take a look at the percentage of kitbashed and rereleased figures over the years: 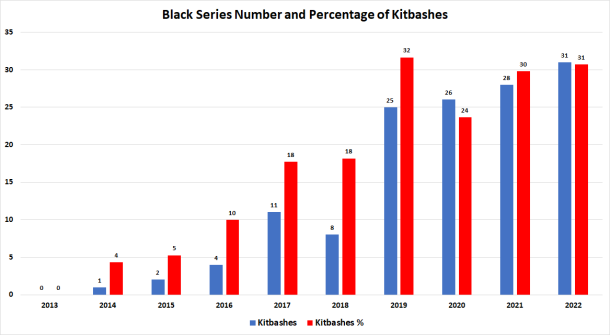 Ever since 2019 little has changed here. We get a lot more kitbashed figures now than in the early years, but this is to be expected. There is a lot more tooling now and Hasbro can mix and match old parts with new parts to create things like the comic book figures.

And finally, let’s take a look at the repaints and rereleases: 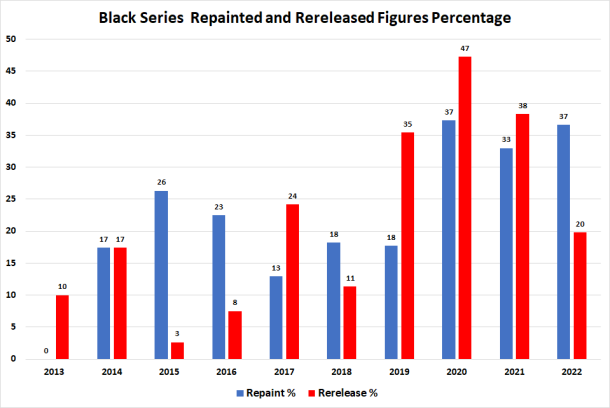 Again, we see that the share of repaints and rereleases has significantly increased since 2019. Much of that can be attributed to the introduction of photoreal rereleases. Also, 2020 was the year in which Hasbro announced that their Star Wars sales had increased by a whopping 80%, but this only illustrated how spectularly bad sales were in 2018 and even for the first half of 2019, post The Last Jedi and Solo and pre The Mandalorian. The decrease of rereleases in 2022 can be attributed to a lack of anniversary lines. This will certainly change again in 2023 when we get all the Return of the Jedi anniversary figures.

So what can we say about the Black Series in 2022?

The number of released sets and figures is almost identical to what we got in 2021, it’s still below 2020 levels, but much more than before 2020. We get more mainline releases, but the increase can be mostly attributed to the new deluxe subline, still, it means there are more new figures, even if most deluxe figures are kitbashes.

The Black Series in 2022 also has a very diverse range of sublines, and we didn’t even get any carbonized or credit collection figures in 2022, much of the actual increase in number of sets and figures over the years can be attributed to these repaint/kitbash sublines, whereas the number of mainline releases has remained more or less stable. It’s interesting to see that the new deluxe subline has been added mostly on top of the number of mainline sets we’d usually get in the past few years, with only a couple of them replacing regular non deluxe mainline releases. So they don’t really replace the regular figures, but are something we get mostly extra. It will be interesting to see how or if this will change in 2023 and if deluxe figures become more numerous.
Their price point is hotly debated, but the economic situation is not easy and tooling is extremely expensive, and the figures have abysmal profit margins (5 – 7% at best). But it turns out tooling is not even the main reason for a figure becoming “deluxe”, it’s more about the paint apps. Still, it’s weird how an all new figure like Fennec Shand with 100% all new tooling is a regular figure whereas the kitbashed Cobb Vanth figure that reuses parts from Boba Fett and is mostly unpainted, other than for the armor and jetpack, is a deluxe release.

Anyway, apart from hot debates about prices the line is going strong into it’s 11th year of existence. I suppose few people back in 2013 thought that we’d still have the Black Series in 2023 – and there’s no end in sight.

Upgrade Your Tamagotchi Collection with New Shells and Amazon Exclusive

Upgrade Your Tamagotchi Collection with New Shells and Amazon Exclusive

Pressing ‘Start’ on 2023 for the Toy Business • The Toy Book

We will be happy to hear your thoughts

Downtownrepublic.com is a male lifestyle blog that inspires and teaches men how to live an extravagant lifestyle on a low income.

Downtownrepublic.comis a participant in the Amazon Services LLC Associates Program, an affiliate advertising program designed to provide a means for sites to earn advertising fees by advertising and linking to Amazon.